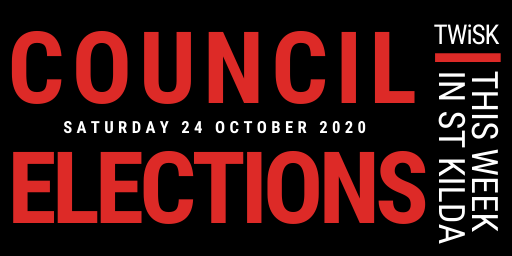 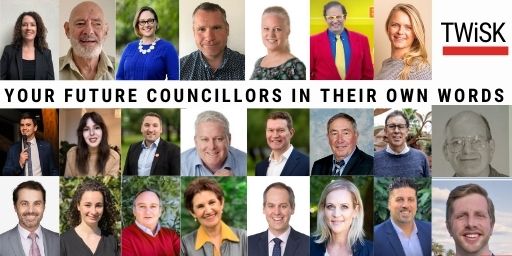 An independent guide to the Port Phillip Council elections.
TWiSK is always free, proudly independent and totally self-funded.
If you have any concerns or suggestions,
please contact Greg Day gday@gdaystkilda.com.au

Quick facts everyone needs to know

# 1 Council elections in Victoria are held every four years.
# 2 Saturday 24 October 2020 is the ‘election day’
# 3 For the first time, all Victorian council elections are being conducted by postal ballot only.
# 4 For the first time, the ALP will stand candidates, following the Greens who have stood candidates for sometime
# 5 This is the first local election without local newspaper to provide journalistic scrutiny
# 6 And of course, the first election conducted during COVID restrictions.
Link to government COVID campaign guidelines Aug 20

Council elections will be held across Victoria on 24 October this year. For the first time, all council voting will be conducted by postal ballot. There will be no attendance voting for any municipality in Victoria – so no polling day booths or people handing out how to vote cards.

Ballots will be sent to all eligible voters from 6 October. In each ballot pack there will be a brochure with a short written statement from each candidate. Eligible ballots must be mailed no later than 6 pm Friday 23 October.

For all residents, voting is compulsory and failure to vote may result in a fine.

Port Phillip City Council is divided into three wards each electing three councillors – resulting in a total of nine councillors. These councillors then elect a mayor and deputy mayor. Since 2015 the mayoral office has been held by Cr Bernadene Voss and Cr Dick Gross.

The ward system can be confusing. The ward boundaries don’t reflect accepted neighborhood or suburb boundaries. The wards have names that mean very little to anyone other than the electoral authority that created them. Effectively it’s a north, middle and south divide with boundaries set to make each ward a similar population.

Anyone eligible to vote in Port Phillip can nominate for election in any ward – there is no requirement to live in the ward.

Residents and resident rate payers required to vote. These people should be on the electoral maintained by the Australian Electoral Commission.

For these Council elections, the roll closes at 4 pm on Friday 28 August.

Who can stand for council?

Any eligible voter can stand for election (and must be nominated by a number of other voters).There is a refundable $250 fee. There some exclusions, eg bankruptcy
Visit here for a full list of requirements / exclusions

The nominations open on 17 September and close at noon Tuesday 22 September.

If there are more than three qualified candidates in any ward, a postal ballot will be held.

How are the winners chosen?

Simply put, winning candidates either get a ‘quota’ (generally about 25% of formal votes cast) or a solid vote plus the preferences of other candidates. For the last spot filled it can be a tense two-week count.

Preferences are crucial. Most if not all successful candidates rely on preference votes to reach their quota. Behind the scenes there can be complex negotiations or preference deals.

Check out the 2016 votes if you are curious

Neighbouring councils that had postal ballots in 2016 had much higher voter turnout than Port Phillip’s under 50%.
Bayside – about 70%
Glen Eira – about 70%
Stonnington – over 70%
This means the quota to get elected will probably be higher. 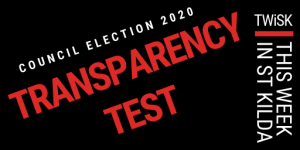 Who is working behind the scenes?

Candidates and parties are not the only people offering up information and opinion during local elections. This is one of the tricky aspects of local elections.
As various groups declare an interest, we will ask a common set of questions to maximise the transparency and accountability. We will publish all ‘reasonable’ answers on this page verbatim.

You can see by the tone of these questions that we want these groups to be up-front about who they are and how they are funded.
TWiSK believes this in keeping with the candidate’s legal requirements to “provide details of any gifts, goods or services worth $500 or more, received during the donation period for use in connection with their election campaign.”

The TWiSK Transparency Test questions
What is your organisational name and legal structure?
How many members do you have?
Is a membership list available?
Please list the names of key office holders?
Who is your official spokesperson?
Who authorizes your election information?
What is your anticipated budget for the election activities?
How will the money be raised?
Who are your top ten donors?
Will you be running or endorsing candidates?

TWiSK’s response to the transparency questionnaire

What is your organisational name and type of organisational structure?
TWiSK is published by Education Image Pty Ltd, trading as Edunity, a publishing and media agency established in 1984.
How many members do you have?
Private company
TWiSK has over 400 subscribers and a similar number of Facebook followers.
Who are the key office holders?
Gregory John Day, sole director
Who is your official spokesperson?
Greg Day 0418 345 829 gday@gdaystkilda.com.au
Who authorises your election information?
G Day, 12 Marine Parade, St Kilda 3182
What is your anticipated budget for the election activities?
Nil
How will the money be raised?
Self funded
Who are your top ten donors?
Greg Day was previously employed by the City of Port Phillip and was external contract editor of Divercity magazine until March 2020.
Neither Greg or Education Image has any on-going work with the City of Port Phillip.
Will you be running or endorsing candidates?
No