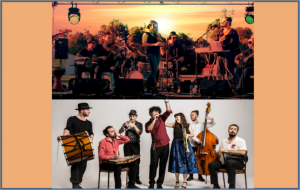 Istanbul is famous for its music and its red hot parties. Crossing the Bridge will be a taste of the real thing, with performances by Melbourne band Bashka and Galata Express. There will be everything from traditional to the vanguard of Turkish music. Expect to see plenty of dance-floor action so come prepared!
Tix and info
Also Friday 2 Apr Mi-Sex Tix and more info 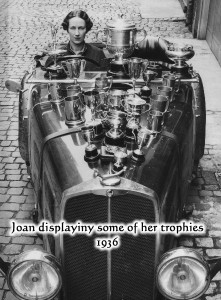 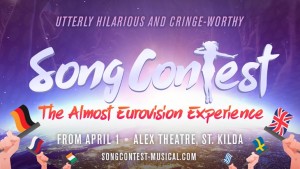 COMEDY FEST 1
Song Contest: The Almost Eurovision Experience
The Alex $49 – $59
From 1 April
A glitzy comedic homage to Eurovision. Eleven finalists compete for the ultimate prize (made entirely of cheese) with the audience voting determining who wins. Just like the real thing, a cross between a musical, a concert and a sporting event. Featuring Bev Killick as hostess Bettina Bitjakokov.
Tix and info 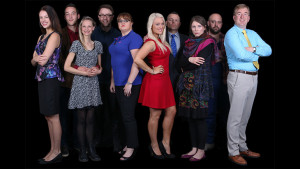 COMEDY FEST 2:
Couples
The National Theatre
$20
From 29 Mar – 16 Apr
Four vastly different couples attend a weekend of relationship therapy – yikes!
With 40 nominations, the show won a raft of awards touring festivals during 2014, including Best Comedy, Best Ensemble and Show with the Most Audience Appeal and had a sell-out season at La Mama in 2015.
Suitable for audiences 16+
Tix and info 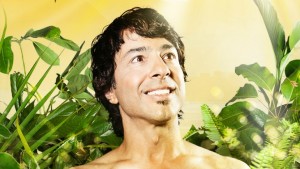 Huge week of music, theatre and arts - you've got the lot - https://mailchi.mp/f5dd8783d280/twis19apr-5018337 April Sun rocks on
midsumma starts up with Bent
Red Stitch hits you with The Cane
Black Sorrows on Anzac Day evening